A World of Shadows

The gold chalice and the wooden one cast identical shadows. Those people who see only shadows, and live their lives accordingly, will find it nearly impossible to recognize that one chalice is worth far more than the other. The shadow of smoke plumes from a forest fire look much like the shadow of a cloud bringing rain that can put out the fire. How can you tell which is which if you only see the shadows? If you can only see the shadow, how do you know that you are walking toward the rain and away from the fire? Shadows can be deceptive in many ways.

This photo of a Javanese shadow play shows shadows that are somewhat human, but have been stylized according to the art of that country. If one saw this as reality rather than as a play, he might think he was seeing strange alien creatures (are you listening channel H2?).

Shadows can be deceptive in many ways. They can confuse us by making n object appear in a different shape than it really is. I recently saw a photo that illustrated this. A simple length of tube or pipe had a light shinning at one end creating a round shadow on the wall and another light shining on the length of the tube creating a rectangular shadow on the wall (unfortunately, I could not fine the photo to include in this post.) If a person say only the round shadow, he might conclude that the object was a sphere, while the person who say the other shadow would think it was a rectangular block., and the third person who say both shadows would think there were two separate objects! 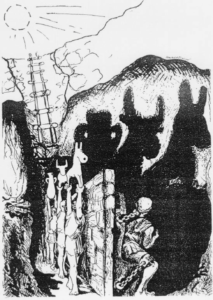 In Plato’s classic Allegory of the Cave, a group of people living in a cave have a very false view of the world because the only thing they can see is the shadows on a wall. Plato was trying to teach his students that the philosopher must see beyond the shadows to the reality that is projecting them, but what exactly is that reality.

The reality that Plato wanted his students to see is not the physical form of the object casting the shadow, those physical objects are just another level of shadows! The world of matter is the shadow world, the world of illusion, the world of deception. It is not at all what it appears to be because our physical eyes, and other physical senses, can sense only the shadows called matter so we are deceived into believing that it is real. That is not to say that matter is not real. Matter is real just as the shadow of a tree is real, but the shadow is not the tree and matter is not true reality.

What Plato and other philosophers, prophets, mystics, and religious leaders have tried to get people to understand for thousands of years is that there is something beyond those shadows of matter, something that is permanent and unchanging. That something is called spirit. And just as you cannot have a shadow without some object and a source of light to make the shadow, you cannot have the shadowy stuff of a material object or being without a spirit behind it, molding it, projecting it. So the physical think is “real”, but only in the way that the image on a movie screen is real.

In Plato’s tale of the Cave, a person had to be led out of the cave to see the fire and real objects that were projecting the shadows. No matter how long the person stayed in the cave and observed the wall in it, he would see nothing but deceptive shadows, except perhaps for an occasional vision which he would dismiss as a hallucination or meaningless dream. He had to get out of the cave.

The cave is our human brain/mind and the shadows are the images sent to that mind and interpreted by it using the filters of experience, teachings and beliefs. We need to get out of that cave to see truth and that means awakening our spiritual faculties. What few conventional churches fail to teach is that we come into this world of matter with our spiritual faculties in a dormant state—a kind of coma—from which they must be awakened if they are to truly function. It is the purpose of any legitimate spiritual or mystical to awaken and develop those faculties: the spirit and soul. It is only when those faculties are awakened that we can see beyond the shadows and are no longer deceived by the world of shadows.

In the movie, Killer Klowns from Outer Space, one of the clowns projects a shadow monster on the wall which thrills people until it eats them. Don’t get eaten by the shadows, turn to the Light!

A variation of this post was previously published on the Solar Wind blog.