Spiritual But Not Religious (SBNR) as We See It

“‘Spiritual but not religious’ (SBNR), also known as ‘Spiritual but not affiliated’ (SBNA), is a popular phrase and initialism used to self-identify a life stance of spirituality that takes issue with organized religion as the sole or most valuable means of furthering spiritual growth.
Linda A. Mercadante categorizes SBNRs into five distinct categories:[20]

“‘I’m spiritual but not religious.’
It’s a trendy phrase people often use to describe their belief that they don’t need organized religion to live a life of faith.
But for Jesuit priest James Martin, the phrase also hints at something else: egotism.
‘Being spiritual but not religious can lead to complacency and self-centeredness,’ says Martin, an editor at America, a national Catholic magazine based in New York City.” ~CNN

Spiritual but Not Religious

You hear it a lot these days. It’s becoming the theme song of many variations of New Age Spirituality. “I’m spiritual but not religious,” they shout proudly. It is particularly popular with a number of Americans. It has been claimed that nearly one-fifth of Americans are members of this group. The Pew Research Center says it is actually more like 27%. It even seems to have reached the point where many people think that spirituality is anti-religion by definition. But if you ask them to define spirituality or religion, they can’t. They can repeat a memorized mantra or meme, but not tell you in their own words. And if you ask them how many religions they studied to come to this conclusion, they won’t answer. Because they haven’t studied the many and widely-varied churches and faiths at all. They are simply accepting another person’s word for it. The very thing they say is wrong with religion!

But those who profess this philosophy are showing by doing so that they are not only anti-religion, they are also not truly spiritual. Let’s look at some reasons why.

As Father Martin says in the quote from CNN, this SBNR attitude hints of egotism. Actually, any “I’m better than you because,” kind of philosophy shouts of egotism. And while real spirituality is not opposed to anyone having an ego (we need ego), it does promote humility. Humility means that we don’t think we are better than others because we know something they don’t know. Spirituality means we don’t talk or act like we are superior to any other group because we have different beliefs. We don’t even look down on the agnostics, atheists, or those who devoutly attend religious services. 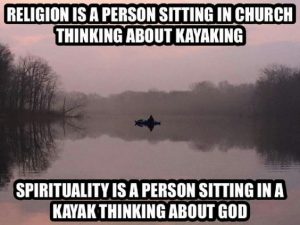 One of the reasons the SBNR crowd is critical of religious people is that religious people accept beliefs for which they have no proof. These religious belief systems do not come from experience, but things they were told by others. They may even accept beliefs that have never been stated by any prophet or saint but are simply the opinions of preachers. That, the SBNR folks say, is wrong. They are correct. It is wrong to accept beliefs for which you have no proof and nothing else to make you believe them. Sometimes, however, the only proof we need is that our intuition tells us it is correct. But what about the beliefs of the “Spiritual but Not Religious” crowd? Do they have any more proof of their beliefs? Sorry, but I don’t think they do.

Meditation is the Only Path to Spiritual Awakening

One of the most accepted beliefs among SBNR groups is that the only path to spiritual awakening is through meditation. Not only is meditation absolutely required, but it is also the only thing required. A spiritual life is not possible without it. Further, they profess that if everyone started meditating, anger, jealousy, and other negative thoughts and emotions would completely disappear. If we all meditated, they say, we would all live together in peace and harmony. We would also become very spiritual.

But there are countries in the world where a large number of people have been meditating for centuries. They are not more peaceful, spiritual, or otherwise better than countries where few people meditate. Since the Beatles first got Americans interested is meditation, we have seen it grow from a few thousand followers to millions who now practice meditation. Yet the United States has not become more peaceful or loving. It may have become a bit more spiritual, but only a little. So as far as I can see, this is an SBNR belief that is not supported by any real proof.

The typical ancient mystery school had students that studied for several years, if not a lifetime. Do you really think all they learned was meditation? Why did it take them years, while modern meditation is taught in weeks, or even a few days? The answer is that meditation was but one spiritual development method taught, and then a very basic one. It was like a spiritual first-grade. Those schools didn’t end with first grade.

No One Path to Awakening

Another common belief within this movement is that there is no one path to spiritual awakening and enlightenment. Further, they say all paths are the same and we must each find our own. While this is not entirely false, there is little proof that is is true.

Let’s say I want to go from New York to Boston. I could get on a cruise ship to London, then take a train to Rome, then fly to Tokyo, Japan, Then fly to San Francisco, then take a bus to Boston. In possible less than a month, I will be in Boston. Or I could just fly from New York to Boston and be there in an hour or two. Yes, both paths get me to Boston, but one does it so much better. So another SBNR belief that doesn’t seem to have any proof to it yet is widely accepted.

All Religion is the Same

The primary concept of SBNR is that all religions and all churches are the same. They may differ in name and in minor details in their religious traditions, but they are otherwise identical. All churches and religions fail to help you, or even allow you, to develop your own spiritual faculties. 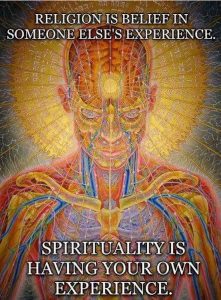 While we can look at the major churches and religious institutions that exist today and find much proof of this, that doesn’t mean it applies to all churches. There are some, few and small perhaps, that actually teach their members to develop their spiritual self just as a spiritual school would do. But in the United States and some other countries, doing that as a church has some advantages overdoing it as a school. One of the primary advantages is that by law, the government cannot interfere in the teachings of a church. Unless the church is teaching people to commit illegal acts or to overthrow the government, they are not likely to receive interference from the government.

So all churches and all religions are definitely not the same. And to accept that they are based on the opinion of someone else is to do exactly what the SBNR folks accuse the religious of doing.

Atheists Can Be Spiritual

One of the beliefs of some of the SBNR people is that there is no God. They say God is a fantasy made up by men. Their proof of this? Once again, they have none. But here is my take on this.

If you are into spiritual development, then you must have some reason to think that the spiritual dimensions are better than the material one. I can certainly agree with that. But if you do believe that, you should have some idea of how and why it is better.

The spiritual realm has many advantages over the material. There is no disease, no starvation, no illness. Neither is there death of the spirit. There is no randomness in spiritual dimensions. Everything runs smoothly. Everything does what it is supposed to do. That is intelligence.

If the spiritual realms show intelligence far greater than the material realm does, then that intelligence must come from some force or being, some higher power. Of course, the idea of God as an old man sitting on a cloud and shooting lightning bolts at naughty people is ridiculous. But if you think of God as universal consciousness, then you must either accept that He exists, or believe that both the physical and spiritual universes are random nonsense not worth bothering with. In which case, why bother with spiritual development?

So while I think it is great that people are rejecting the large, conventional churches, and turning to spiritual development, I also think the “I’m spiritual but not religious,” type needs to rethink that intolerant belief. We shouldn’t forget that such great spiritual leaders as St. Francis of Assisi and Jacob Boehme were religious also. And religious communities like the Essenes were just as spiritual as the schools of Pythagoras and Plato. Therefore, spiritual beliefs do not preclude religious ones, and being religious does not mean you can’t also be spiritual. That is what we believe and teach in Cosolargy. You can practice any religion, belong to any church and still engage is spiritual development.