12 Days of Christmas in Cosolargy

“The Twelve Days of Christmas, also known as Twelvetide, is a festive Christian season celebrating the Nativity of Jesus. In 567, the Council of Tours ‘proclaimed the twelve days from Christmas to Epiphany as a sacred and festive season, and established the duty of Advent fasting in preparation for the feast.’ The Second Council of Tours of 567 noted that, in the area for which its bishops were responsible, the days between Christmas and Epiphany were, like the month of August, taken up entirely with saints’ days. Monks were, therefore, in principle not bound to fast on those days.

In England in the Middle Ages, this period was one of continuous feasting and merrymaking, which climaxed on Twelfth Night, the traditional end of the Christmas season. In Tudor England…In the United States, Christmas Day is a federal holiday that holds additional religious significance for Christians. … The traditions of the Twelve Days of Christmas have been nearly forgotten in the United States. … Presently, the commercial practice treats the Solemnity of Christmas, 25 December, the first day of Christmas, as the last day of the ‘Christmas’ marketing season, as the numerous ‘after-Christmas sales’ that commence on 26 December demonstrate. The commercial calendar has encouraged an erroneous assumption that the Twelve Days end on Christmas Day and must, therefore, begin on 14 December.” ~Wikipedia

The 12 days of Christmas is the period that in Christian theology marks the span between the birth of Christ and the coming of the Magi, the three wise men. It begins on December 25 (Christmas) and runs through January 5, with Epiphany falling on January 6.

History of the Twelve Days of Christmas

Twelvetide has been celebrated in Europe since before the Middle Ages. It was a period of celebration and each day has a special significance. Most of those days celebrate saints that were then popular in Europe but are hardly known today. They include the 5th day when St. Thomas Becket was celebrated and January first which was the day of Mary, mother of Jesus Christ, in addition to being New Years Day. The twelfth day, January 5, was known as Epiphany Eve to many. Some early Christians, especially the Catholics, equated the twelve days of Christmas to the twelve articles of faith in the Apostle’s Creed. Today, few in the United States celebrate traditional Twelvetide. We in Cosolargy are among those few. Our reasons for celebrating the Twelve Days of Christmas are not the same as those of the Middle Ages.

The Twelve Days of Christmas in Cosolargy

Like Europeans of the Middle Ages, we in Cosolargy continue to celebrate the full Twelvetide, but our reasons are more spiritual than material. They are not days for celebrating specific saints. Nor are they days for parties and feasts, with two exceptions.

First, we have to take a quick look at how December 25 became Christmas. Most experts who have studied the descriptions in the Bible, and various historical references, agree that Jesus was almost certainly born in the spring, not December. But the early Christians had no idea when Jesus was born. His spiritual birth on Epiphany Day is what mattered to them.

But some of the early Christian groups decided they needed to know. Somehow, they decided on December 25. This was probably because the Romans who were controlling the Holy Land at that time celebrated the birth of one of their popular Gods, Mithra, on that day. But it was also the idea of the Winter Solstice, which had been a kind of holy day among so-called pagans for many centuries. Since the Christians didn’t want anyone to know they were Christians, celebrating the birth of Jesus on the same day as Mithra kept suspicions at bay.

Another reason is that the period around the Winter Solstice has been a holy time in religions even before Christianity. This may be because it is a period of strong spiritual energy.

The Twelve Days of Christmas – The Christmas Carol

While we are discussing the twelve-day vigil, I thought I would delve into the well-known Christmas song about the twelve days and the spiritual symbolism within it. Once I got started, I found so much more than I expected that I would have to assume that the original version of this song was either written by a spiritual person or inspired by one.

Superficially, it appears to be a very strange and materialistic song, but you have to look at it more closely. Note that my interpretation will differ from the superficial one of Evangelical Christians who seem to have looked almost exclusively at the numbers and ignored the symbols themselves. 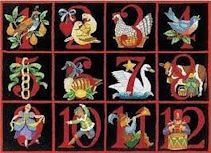 Let’s start by looking at the song as a whole. The standard melody for the carol was published by Frederic Austin in 1909.  First, we are listening to someone sing a list of gifts that he or she received from a true love. That true love is never identified. Second, one of the first things I notice about this song is the birds. Birds everywhere. Lots of birds. And birds are the messengers of God and Christ in spiritual symbology.

Another thing I noticed is that on each day, not only is a new gift given, but all the gifts from the previous days are repeated. To me, this is symbolically saying that the gifts from God are cumulative; we don’t lose one when we get a new one, we just keep getting more. Now let’s look at the individual gifts.

First Day of Christmas – A Partridge in a Pear Tree

Like all birds, two turtle doves symbolize messages or messengers from God. In addition, doves are well-known symbols of peace and turtle doves represent love and devotion.

One interpretation is that three hens represent the three forms of the Goddess: virgin, mother, and wise woman. Another part of it, however, is that hens are associated with eggs and eggs are symbolic of rebirth and eternal life.

Or more correctly, “Colly Birds.” These are blackbirds, crows, or ravens. Ravens are symbolic of guardians or protectors. They are also associated with magic, or miracles, and hidden truths.

According to one interpreter, gold rings actually represent the rings around the necks of pheasants. I find this doubtful. I wrote before in interpreting the gifts of the Magi that gold was a symbolic gift for a king. It might also be a gift from a king, specifically the gift of God’s Grace. And the five rings have a special meaning in Cosolargy: the five suns representing the five ages of man.

Again, we are dealing more directly with eggs which are symbolic of rebirth and eternal life. Geese are also symbolic of intuition and new beginnings. This line represents more spiritual awakening symbology.

Swans represent mystery, elegance, beauty, and purity. Swans were also symbolic of change in some ancient societies. The water they swim in symbolizes creativity, intuition, and dreams.

One interpretation says these are magpies, but I will interpret them as actual milking maids. Maids, maidens, or virgins are obvious symbols of purity and innocence. Milk is symbolic of purity, life, God’s Light, or Grace.

Dancing is often interpreted as a form of courtship, but it is also an expression of joy. The Dancing Dervishes are just one example of people expressing spiritual devotion through dance.

Leaping, like dancing, is an expression of joy or mirth. It can also symbolize change, moving forward.

Piping refers to, of course, music, so along with the drums this line symbolizes what all music symbolizes which is vibrations, frequencies, harmony, and, jumping, dancing, and joy. I think the most important part here is that music helps one raise his frequencies toward the spiritual. The flute, or pipe is often a symbol of “sky music” or spiritual music which goes with the idea of music being used to raise one’s vibrations. Pipes or flutes are generally instruments of high pitch music, and therefore represent the higher frequencies of spiritual realms.

Drums are said to represent, among other things, heartbeats and therefore, life. Drums were also used for, and symbolize, communication. It is also a musical instrument. Ancient shamans often used drums in their ceremonies.

So it seems that the gifts of the Twelve Days of Christmas include such things as grace, light (especially spiritual) rebirth, immortality, protection, love, devotion, miracles, oneness, and spiritual vibrations. Those are the gifts God gives in the Christmas season leading up to the enlightenment of Epiphany on January 6. They are the gifts of the Holy Spirit, not materialistic at all.

In this interpretation, I have looked only at the gifts and not at the numbers. Numbers, of course, all have their own symbolism associated with them. Twelve is probably the second most referenced number in the Bible after seven. The twelve Apostles, the twelve tribes of Israel, etc. Note that there are variations of this song and, in some, the order of the gifts is different. I do not claim that my interpretation is the correct one, it was mostly just a matter of satisfying my curiosity to see what symbolism might be in the song. What I found leads me to believe that the song is intentionally full of significant spiritual symbology.